Never did I ever think I would race 70 miles on the mountain bike at one time. This year I have been doing more endurance training to test my limits both physically and mentally. On Saturday, I was able to travel to Milledgeville, Georgia for the 2nd Southern Endurance Cup race in the series: Old Capital Classic. When your favorite mountain bike discipline is Short Track, racing and training for a 6-hour event is a whole different beast. I love the excitement and all-out power in a short track race, because you can go as hard possible for the whole race since it is shorter and more spectator friendly than any other event. The start of a short track race is all about how you do off the front, how fast you can get in the lead group, and whether or not you get the hole-shot. You have to stay in the front in order to not get pulled from the race early, you are able to see the other riders around you the entire time, and the track is lined with heckling and cheering spectators to keep the excitement levels high. When you race for 6 hours instead of 30 minutes, the start line matters much less, and your endurance, pacing, and mental stamina matter so much more.

6 hours of racing in the woods also means there is a lot of time to be alone with your thoughts and away from other racers, forcing you to find motivation internally. This is one of the reasons that these endurance races appeal to me most, because it gives me a chance to see what I am capable of, pushing past what I initially believe to be my limits. In bike racing, you have teams and can benefit from working together in races, but mountain biking especially is an inherently individualistic sport. Much of racing is mentally challenging, just as it is physically demanding, and as a racer you have to be constantly hungry for the next challenge and always seeking self improvement. It is easy for this to become abstract, especially because there will always be riders who are faster or fitness levels that seem unattainable. Endurance races like these 6-hour events force me to realize that the only person I need to beat to improve is myself. In a short track race, it is hard to ease up when everyone is cheering and riders around you are sprinting ahead. When you are have been riding alone along trails for a couple hours without seeing other riders, it is easy to come up with excuses for not trying hard. Once the adrenaline fades and the hours tick by, staying in that same race mentality gets harder. That is the time the is most difficult during the race, but it is also the time that you get to test yourself as an athlete, and figure out where to dig deep to get that motivation and stamina from.

For me, this slump happens about 3 1/2 hours into the race – you realize you are hardly halfway, the adrenaline from the start has faded, and the pressure of the finish line is still far away. During this race, there was only about 600 feet of climbing per lap, and each lap was about 10 miles. I was averaging about 45 minutes per lap, so my goal was to do at least 7 laps within 6 hours. During the beginning of the race, I went out way too hard and set a pace that was unrealistic for me to maintain (back to my need for practice with pacing myself..). I was excited about the race, and my competitiveness got the best of me. Another rider Kayley Burdine was ahead, and I was determined to stay with her. She goes by the nickname “quadzilla”, and she definitely has the strength to back that up. During the end of the first lap, I made a pass and attempted to drop her on the main climb. No luck- she was right on my wheel and had no signs of slowing. We were still together into the second lap, but on the climb she passed me again and I couldn’t stay at the pace she set. With my heart rate climbing into the 180s, I had to back off a bit to sustain my energy for the rest of the race. I was impressed with her speed, and though she was in sight for the third lap, I was fading fast by the fourth lap. By this time it had been about 3 1/2 hours into the race, and I was feeling empty. I had been eating something every lap to keep replace the calories I was burning, but it is hard to eat enough to sustain energy for that long. I had Hammer gel, Heed drink mix in my water bottles, and some date and nut bars that I’d made at home. I’d been saving a coca-cola for the mid-race slump, and the quick rush of sugar and caffeine is always surprisingly refreshing. I don’t really drink soda, but during races and long rides I’m always surprised how much of a mood changer a quick drink of coke is. While riding along and waiting for the caffeine to kick in a bit, another rider sitting in third place caught up to me. It was Sarah Griffith, the racer that I’ve competed with in the Southern Classic Races. Though I was initially disappointed to have been caught, having another rider to pace myself with was a welcome distraction after being on my own for so much of the race. Sarah is great at pacing herself during rides, and she often beats me at the end of races by coming out of no where and passing me at a seemingly effortless pace when I have used up all my energy at the start. I have a lot to learn from her strategy, and I enjoyed riding with her and even chatting a bit as we rode on our 5th lap around. She gave me the extra boost I needed to get my head back in the race, providing some pacing, distracting me with conversation, and even giving me a draft on the flat open sections.

Going into the 6th lap I traded places with Sarah and was back in 2nd place, as long as I could hold my speed. At this point I was nearing the 60 mile mark, and every part of my body hurt. At the same time though, we were so close to the end, and I was determined to reach my goal of 7 laps. Sarah told me that she was going to stop after 6 laps, and I have to admit that the idea of just finishing a lap early was so appealing. I was exhausted to the point of delirium, and even felt like crying though nothing was wrong. However, with 2 miles to go on the 6th lap, I was still in front of Sarah. Though she had been a welcome companion, I had to remember that we were still racing and I wanted to make it to the finish before her in case she decided to go for a 7th lap after all. Sarah had been sticking to my wheel with ease for the whole lap, but suddenly with a mile to go she dropped back, allowing a gap to form between us. I assumed that she was letting up since it would be the last lap she wanted to do, so after making it through for my final lap, I stopped to grab another snack from the feed zone and set out for the last time. 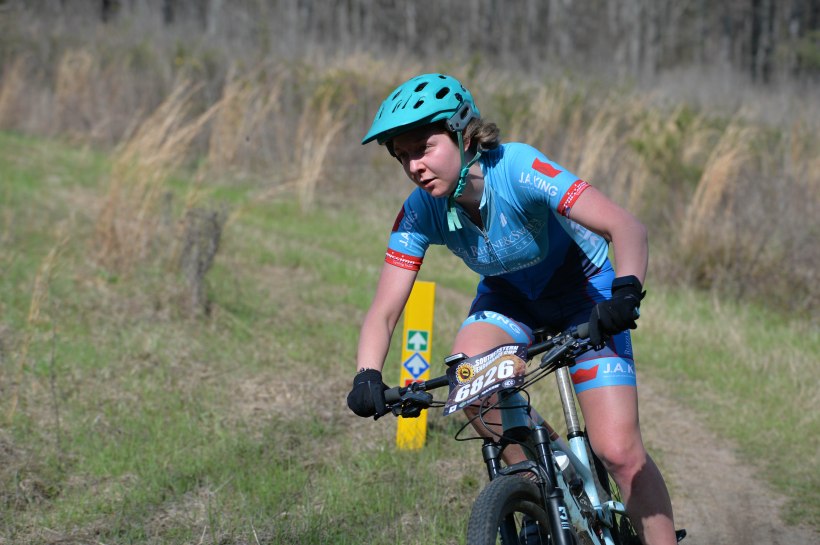 Every pedal stroke felt like swimming through lead, and though I thought I was in no danger of being passed by Sarah, I still had to make it back around before the 6 hour limit was up. My throat felt tight and I felt both hungry and nauseous at the same time, but with only a few miles to go it was a great test. The last 20 minutes of the race felt like an eternity, but making it to the finish line was the best feeling after a long day. I made it through the finish, and immediately put my bike down and lay on the ground, happy to not be moving.

The feeling after a 6 hour race is simultaneously the best feeling and the worst feeling. It is the best feeling in the world because you have conquered yourself, pushing past limits you thought you had and setting new records for yourself. Completing 70 miles made me feel stronger than I thought I was, and though I am always striving for first place, I was proud of my 2nd place finish in a race unlike any I had done before. At the same time though, the end of a 6 hour race is so draining that after finishing I wanted to sleep, eat, cry, and laugh all at the same time. It was the worst because my body craved food, but I was also weak and nauseous. I wanted to sit down, but I also needed to stand up and stretch. I had to drink water, but I also realized I needed to pee for the first time in 6 hours. It was a very confusing and gross feeling, but in the end I was content to just lay next to my bike, elated with the thought of what I had been able to accomplish.

It turned out that Sarah had gone out for a final 7th lap, and that she was only a few minutes behind me. If I had let up any more on my final lap, I would have slipped from 2nd to 3rd place in the last bit of the day, revealing to me the importance of staying focused during the whole race. Completing the 6-hour race was a great test of my internal motivation, ability to push my body even when tired, and practice exercising mental strength during a race. The good thing about these races is that the next one is scheduled far enough apart to look forward to it, but with enough time to forget how painful it was 🙂 Joking aside, it was an incredible weekend of training, and I learned a lot about pacing and strategy while racing with some great women. Thanks to Chainbuster Racing for the event, Wingfoot for the photos, and JA King for the support!