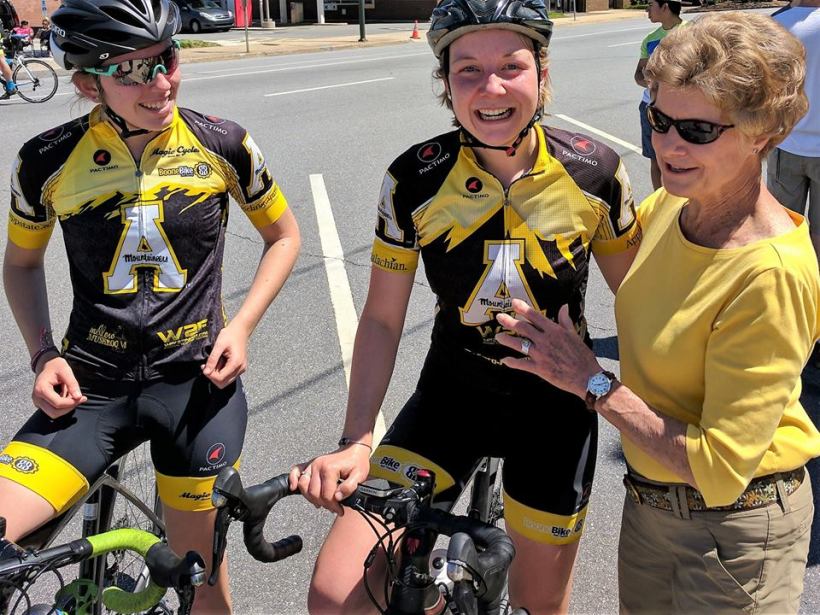 Not only was this weekend the closing races for the 2017 ACCC road season, it was also the home race for Appalachian State. A lot of planning goes into putting on a race- luckily we have a hardworking advisor and a teammate elected as road season VP who work together to make sure the weekend goes off seamlessly. Saturday’s race took place in Collettesville, NC, about 45 minutes from the University. This race was double points in our ACCC conference, but we also had racers attending from nearby schools in the SECCC conference like Lees McRae and Mars Hill. I spent the morning volunteering with teammates as a course marshal. That afternoon, the women’s A race started at 3pm and headed out for 54 miles. The weather was unseasonably warm, but it was a welcome change from the chilly days in Boone recently. Having new faces in the peloton was refreshing, and having the other conference teams attend made for a bigger women’s field. We started with the men’s Bs, and the group slowly thinned out as attacks happened on the climbs. By the last two laps, there were just four women left in the lead group. The pace was being set by a rider from Lees McRae, but since her points would only displace ours in the conference, I was focusing more on the Duke and William & Mary riders left. We stayed together until the last 200 meter mark, and then it was a sprint to the finish line. I was barely beat by the rider from Lees McRae, but came out on top in my conference. I was excited both because that meant double points, but also because it was a conference win at my home course.

On Sunday we headed to downtown Morganton, who had agreed to support our race and shut down most of their streets for the day. This resulted in a fun 6 corner crit with plenty of spectator friendly spots. My family was nice enough to come watch my race, which doesn’t usually happen with 4 younger sisters who all have busy schedules. I was excited to see them, and though my legs were feeling sluggish from the climbing the day before, I couldn’t wait to start. Our race took off at 12:45pm for 45 grueling minutes. The course didn’t have many hills, so everyone stayed pretty closely packed for most of the race. My teammate, Maryann, has more road racing experience than I do, so she helped me strategize and work to pull off some attacks and counter attacks to try to break up the field. In the last lap, Lees McRae was off the front, and Mars Hill, William & Mary, and Navy went to chase her down. I tried to stay on their wheel, but ended up 5th in the sprint. It wasn’t as strong of a finish as I would have liked, but it was a fun course and a great end to my first road season as an A. Our team ended up third in the conference, I won third for individual standings, and I got a medal for my conference win on Saturday. Looking forward to Road Nationals in Colorado!